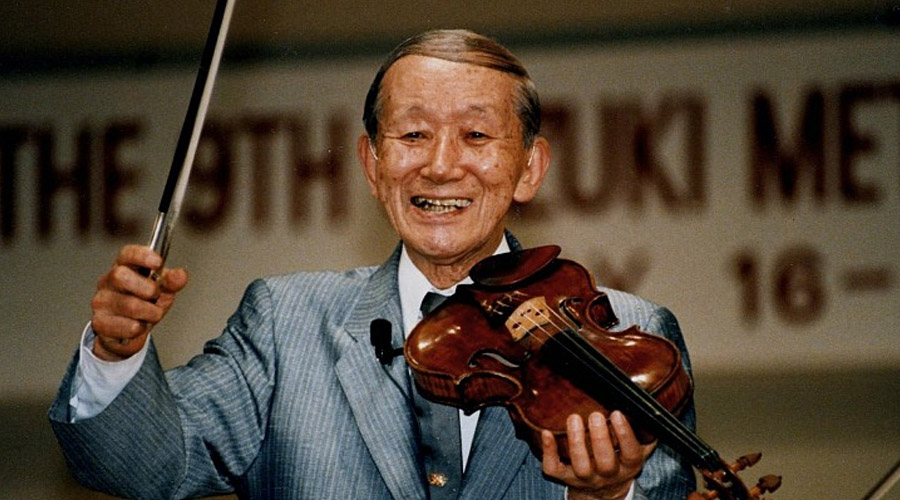 One of my clearest memories of early youth is my dad imploring me to pick up an instrument, any instrument. A deep regret of his had always been being musically “un-inclined”, so it was important that he bestowed the opportunity of music lessons upon his kids. It was, he would say, “akin to learning a second language”.

Last week I was scrolling though some pictures of a Facebook friend and came across the one below. Immediately it brought me back to the early 70’s when twice a week, under the Suzuki Method, I was learning how to play the violin.

It was my choice, the violin… it came down to that and the piano. I went with the fiddle mostly because of the velvety plush interior of the carrying case, seriously. It was soft to the touch and rich in color. Combine that with the look of the antiqued, dark red/brown varnished finish of the instrument it was carrying… it was a sight to behold, a very intense visual for a kindergartener, and I was hooked (temporarily).

Shin’ichi Suzuki was the inventor of the Suzuki method. After growing up working in his father’s violin factory in Japan, he championed the basic philosophy that all children, given the right environment, have the ability to learn a musical instrument. This isn’t to say that everyone will reach the same level of achievement, but the capacity to learn music is there, much like learning a language.

To Suzuki, and my dad, the key was getting an early start…

So at five years old, about the same time I was learning the alphabet, I was introduced to this new language. From kindergarten through 6th grade I was eager to get better and diligent: I learned to read music, I was a member of a small orchestra, and I performed in bi-annual recitals. I can remember playing Twinkle, Twinkle and the theme from The Flintstones in early recitals and by my 6th year playing Bach and Mozart. I was actually becoming a schooled violinist.

For some reason, the summer before 7th grade, I quit. I don’t know if it was peer pressure (how foolish if it was), or the cumbersome act of carrying the thing to school for six years, or just plain burnout. Whatever the reason, it was a decision my dad told me that I would regret one day. And was he ever right…

These days I am constantly reminded of my decision, as I’m surrounded by professional musicians at “the office”. But even if I didn’t go to work every day at a music studio, I would still support Suzuki’s school of thought that learning music as a child fosters discipline and a work ethic that crosses over into academia and life. Maybe this answers why I stopped making straight A’s in middle school.

Suzuki himself said it best:

“I want to make good citizens. If a child hears fine music from the day of his birth and learns to play it himself, he develops sensitivity, discipline and endurance. He gets a beautiful heart.”

You can learn more about the Suzuki Method here »