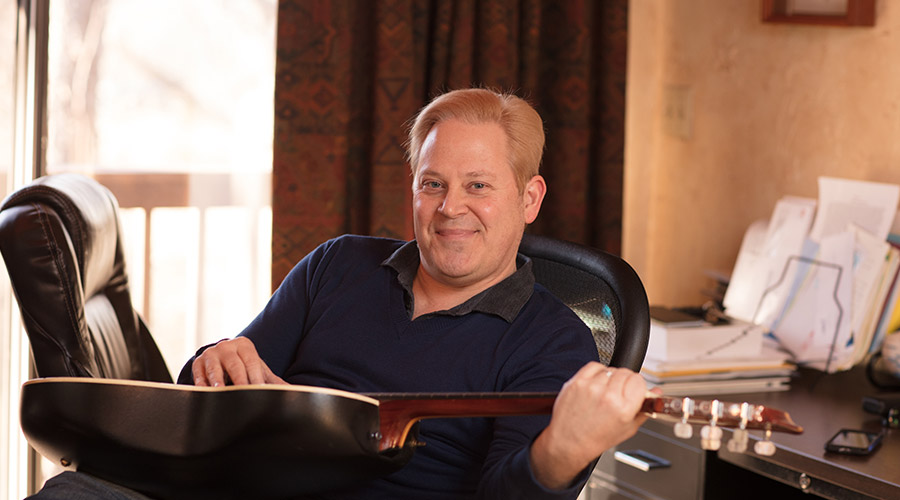 Throughout the year we’ll be highlighting some individuals here at Stephen Arnold Music.  The names and faces behind the music!  As you can imagine, it’s not just late night recording sessions and high profile clients… there’s blood, sweat, and tears that go into every part of our company – from our awesome sales team chasing down leads, to our admin folks answering the phones and drawing up contracts.  Everyone’s got their own story, so we recently sat down with our Creative Director, Chad Cook.  We asked him a few questions, and he was happy enough to let us know.

Our Creative Director Mixing It up!

What was the first album you bought or remember listening to?

I was obsessed with vinyl records as a toddler and child.  I called them “goo-gahs”.  I had many 45s and full sized records and would take them everywhere with me, including the bathtub, pool, etc.  Needless to say, many of them were not in the greatest of shape when I would try to play them.  I’m told I was writing little songs and melodies on my toy piano from the time I could stand up.  My favorite music and bands at a young age were The Beatles, Donovan, The Monkeys, Elton John, Paul McCartney and Wings, and ELO.  The earliest albums that I remember playing over and over were The Beatles Sgt. Pepper’s and Magical Mystery Tour, Elton John’s Goodbye Yellow Brick Road, and Donovan’s Barabajagal.  I remember being particularly infatuated with Donovan’s song “Atlantis” and The Beatles’ “A Day In The Life”.  A 45 single I remember playing over and over when I was very young was “Put The Lime In The Coconut” by Harry Nilsson.  Some trivia – I met and shook Paul McCartney’s hand in NYC a few years ago.  But that tale is for another time.

What was your first musical instrument?

My first true musical instrument was a black Steinway baby grand piano when I was 9 years old (I still have it).  I took piano lessons for many years, but spent most of my time writing my own songs and was never really interested in playing songs I did not write myself.  Also, my father and uncle donated a pipe organ to our church when I was 8 years old.  The church was near our house, so they would let me come in and play when it was unoccupied.  I thought that was the coolest thing ever and remember many days after school experimenting and playing with that organ.

Today you produce branded music packages for some of the biggest networks in the world. How did you first learn to write / produce or learn music production?

Keyboards and programming songs became a reality when I was in high school in the 1980s, and my passion became writing songs with MIDI and collecting keyboards and sound modules so I could create and produce songs from start to finish.  That led to purchasing 4 and 8 track tape recorders, a mixer, and some microphones so I could record vocals and harmonies.  The first computer I used to program MIDI was an Apple IIe with 128k of memory.  The program I used was called “Texture” and would only allow you to program 8 tracks of MIDI.  Back then, most keyboards were not “multi-timbral” so you only had one or two sounds coming out of each keyboard.  So I literally had around 7-8 keyboards, each being triggered to play an assigned sound through MIDI.  My original collection of keyboards included an Emulator 2 HD, Mirage sampler, Casio CZ1, Korg DW8000, Casio RZ1 drum machine, Roland D-10, Ensoniq ESQ1, and an Oberheim OB-8.

As time went on, multi-timbral sound modules became available so there was no need to have so many actual keyboards to generate all those sounds.  But those days were great because each keyboard had a distinct sound to it, so you would spend time on each instrument finding or programming each sound you needed for each part of the song.  And in the case of the samplers, often creating your own sounds by sampling directly into microphones and then manipulating the sounds with various filters and oscillators.  The most elaborate and powerful tool at the time was my Emulator 2HD which you have all seen in the movie “Ferris Bueller’s Day Off”.  It was a very high-end sampler and allowed for getting very creative with my own sounds.  At that time, new wave bands like Depeche Mode, OMD, Tears For Fears, New Order, and The Eurythmics were using the Emulator samplers as a big part of their sound.

Did you ever have a band or perform live?

I formed a band called “New Life” when I was a junior in high school, as I wanted to be able to play some of my songs live. We played at some clubs in Dallas and at some high school parties and functions.  I had a bass player, guitar player, and a keyboardist.  I would have to bring all of my keyboards and my computer in order to play all the parts that were not being played live (and there were many parts not being played live).  I would set-up each song on the computer with an intro click track and then the band would play their parts as I would perform the vocals.

I never really liked playing live very much as it was such a hassle to get everything set-up and haul so much equipment around.  I found that what I really liked was the creative process in the studio.  To create something out of nothing, enjoy the moment you finish it, and then move onto the next idea and creation.  I’ve never been one to linger.  It’s go, go, go – onto the next.

Guess we have to ask you what your favorite color is and what you do when you’re not here at the studio!

My favorite colors are blue and green, so it’s no wonder I love nature and the outdoors – biking, camping, hiking, canoeing, kayaking, fishing, boating, and skiing.  I love traveling and experiencing new cultures, countries, people, art, and cuisines.  I’m a huge sports fan and, in particular, like football, basketball, and hockey – my favorite teams are all from Dallas, so of course the Dallas Cowboys and Dallas Mavericks. I love to read, educate myself, and grow as a person.  I love the mountains, but if I had to choose, I would choose the beach, as nothing soothes my spirit more than the ocean.  I am passionate about wine and the art and history of it in different cultures and regions.  I live in McKinney, TX with my wife Michelle and son Keegan.  I love my family, and nothing means more to me.  We live near the wonderful, historic town square and close to the Stephen Arnold Music studios, so life is good.  I’ve enjoyed carrying on my passion of creating and producing music and ideas with Stephen and our great team here at Stephen Arnold Music for over 20 years now and look forward to many more.  There is nothing better than waking up each day knowing that the next project will bring, yet again, the challenge of creating something out of nothing.