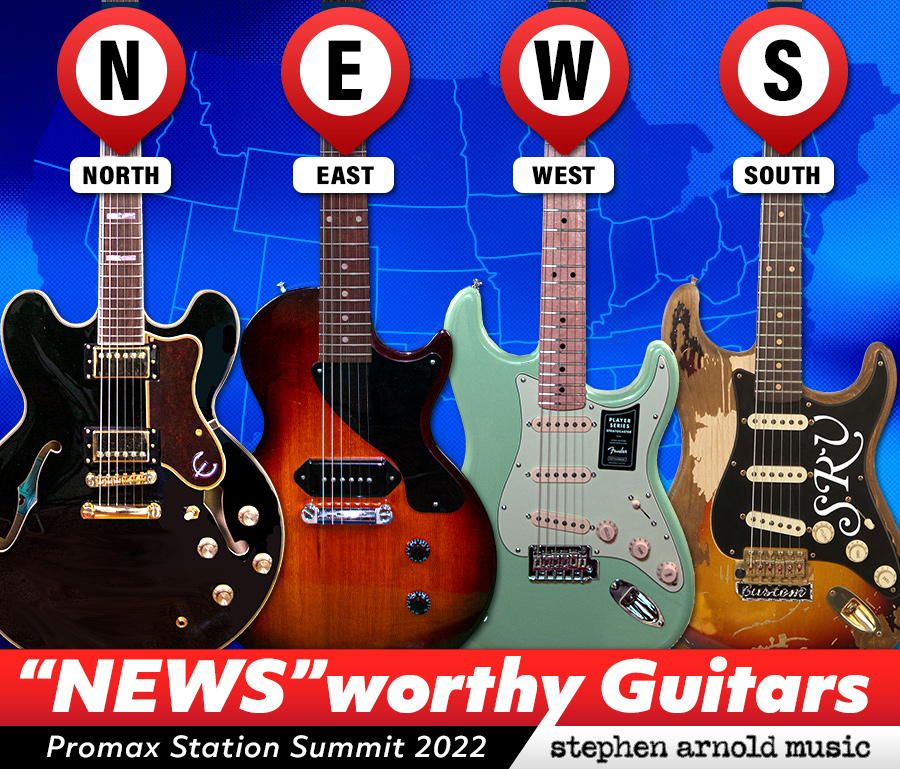 SAM is returning to Promax Station Summit this June, and we’ll be bringing – and giving away – some really cool, iconic guitars. This year’s we are doing a “NEWS”worthy Guitar Giveaway which features a guitar from each region of the U.S. (N: North, E: East, W: West, S: South). So swing on by our Guitar Display and enter to win!

This Epiphone Sheraton II Pro really reflects the northern U.S., Chicago blues scene. Epiphone, you say? You probably didn’t know that Epiphone guitars pre-date Gibson guitars – they started making mandolins in 1873! This beautiful black Sheraton model is based on the semi-hollow body Gibson 335, which has been a favorite of blues players the world over. But many players prefer the more ornate styling of the Sheraton, as well as its rich tone. Bluesman John Lee Hooker played an Epiphone Sheraton for most of his career, and Noel Gallagher of Oasis popularized the guitar with a custom Union Jack version. This instrument is known to punch waaaay above its price point, with beautiful mother-of-pearl and abalone inlays on the headstock and finger board, as well as gold hardware and coil-tapping pickups. Constructed of laminated maple, walnut and rosewood with a solid chunk of maple running the length of the body, the warm tone and versatility of the Sheraton II Pro is hard to beat.

Representing the East coast of the U.S., this Gibson Les Paul Jr. typifies the stripped-down essence of the New York punk rock scene. New York Dolls guitarist Sylvain Sylvain said in 2009: “We called them ‘automatic guitars,’ like a car with an automatic transmission – easy to use.” Originally low-priced and intended for students, this guitar’s most visible punk rock player is Billie Joe Armstrong of Green Day, who thrives on its simplicity and raw tone. The original low price of this axe meant fledgling punk bands could afford to buy them – and abuse them! The Junior originally had a single cutaway, a mahogany neck with a rosewood fingerboard and a slab of sunburst (the ONLY color available) mahogany for the body.  With just a single coil P90 pickup wired through a volume and tone knobs, this Les Paul Jr. is THE icon of the disco-busting east coast rock scene of the late 70s/early 80s

It’s hard to imagine a more emblematic guitar for the west coast, California surf scene than the Fender Stratocaster, especially in this dreamy surf green finish! The Stratocaster was Leo Fender’s response to the growing popularity of Gibson guitars, and with its three pickups, considered a major upgrade single pickup Fender Telecaster. This Player edition features an alder body, a maple neck, three single-coil pickups and that famous Strat whammy bar. Dick Dale literally invented instrumental surf music using this guitar, and it was featured on the 1960 Ventures hit “Walk, Don’t Run.” Duane Eddy and Link Wray also played Strats during this era. As the 60’s progressed, Al Jardine of the Beach Boys favored the Stratocaster, and it eventually became an iconic rock guitar in the 70s. Replacing the now-discontinued Standard Series Strat, this Fender Player Edition Stratocaster honors the core Fender classics with quality construction, vintage-inspired finishes and select modern updates.

It’s hard to imagine a guitar player representing the South more completely than Texas-based blues and rock genius Stevie Ray Vaughan. And as far as guitars go, only a handful are as iconic as Stevie Ray’s go-to axe he called “Number One,” aka “the Wife”. This is a beautiful reproduction; a tribute SRV relic which reflects the ragged, brutally worn finish, upside-down tremolo bar, cigarette-burnt headstock, and truck-stop stickers that spell the local blues-rock legend’s initials. It’s a faithful clone of SRV’s 1959 Strat, with a replica ’62 neck and ’63 body, all of which work together to conjure up that amazing SRV tone. Interesting fact: Stevie’s original Strat was owned by another celebrated Texas musician, Christopher Cross, who traded in the already ragged-out classic in 1974. The Strat eventually found its way into Stevie hands. This tribute SRV is set up and ready to crank out some hot Texas blues!

We look forward to seeing you in Vegas!