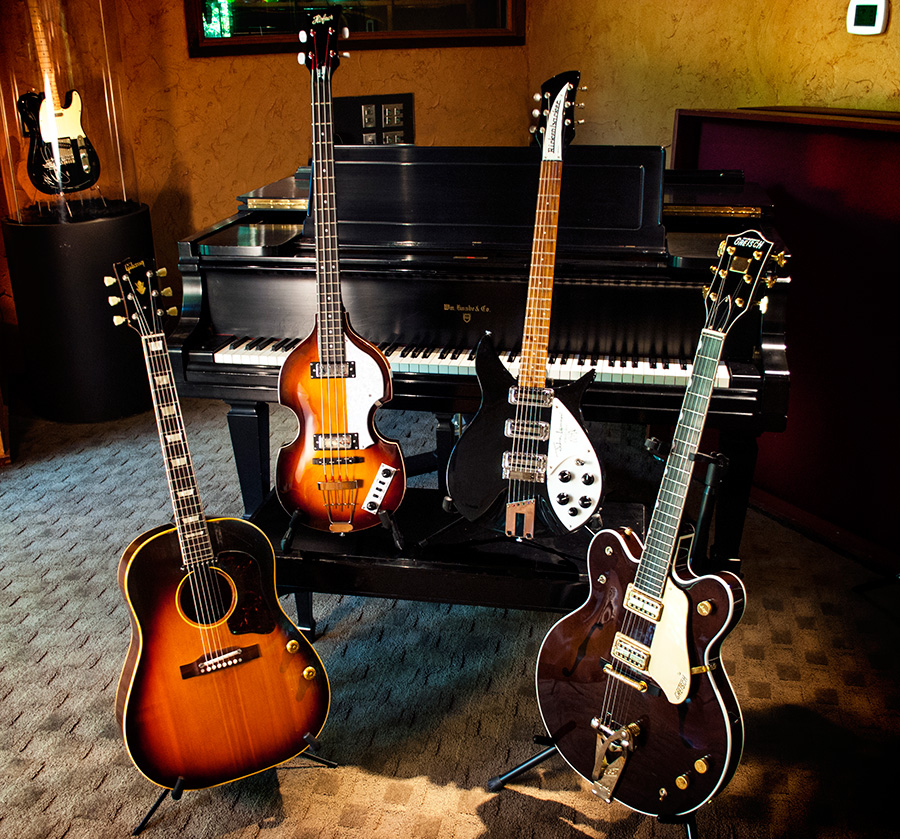 The PromaxBDA Conference is coming up fast! This year, it’s at the JW Marriot in Los Angeles, June 5-8. Stephen Arnold Music (SAM) will once again be giving away a guitar. Be sure to stop by the Stephen Arnold Music kiosks to check out this year’s “Yeah, Yeah, Yeah” selection of legendary Beatles guitars. To enter the raffle, just drop off your business card in the box near the display — it’s that easy. You could win a replica of Paul McCartney’s famous Hofner Violin Bass guitar!

The drawing will be held at the SAM guitar display on Thursday, June 8th, around 3:30 p.m. during the “Networking Break.” You must be present to win. So don’t miss it! You’ll get to see some cool guitars, learn a little something and maybe even win that Hofner bass!

Here are some cool facts about this Beatles collection: 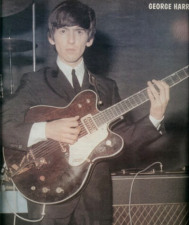 When the Beatles started to get famous in the early 60’s, George bought a 1962 Gretsch Chet Atkins “Country Gentleman” guitar. George can be seen using this instrument more than anything else on stage, but he didn’t use it as much in the studio. It’s interesting George would use this guitar, as he admired and was inspired by much of Chet Atkins’ work. In 1965, the original Country Gentleman flew off the top of their tour bus and was destroyed. As George recalled: “Fourteen of our guitars were strapped to the roof of our Austin Princess, and the only one lost was my Gretsch. It fell onto the road and into the path of the oncoming traffic. About thirteen lorries went over it before our chauffeur could get near it. Then, one of the lorries stopped and the driver came up with the dangling remains of it and said, ‘Oh, has this banjo anything to do with you?’ Some people would say I shouldn’t worry, because I could buy as many replacement guitars as I wanted. But you know how it is. I kind of got attached to it.” 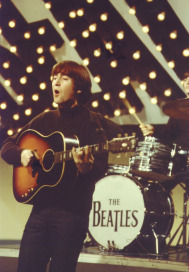 John Lennon couldn’t quite afford his first Gibson J-160E in 1962, so he cajoled Beatles manager Brian Epstein into co-signing for the guitar. Epstein obliged, and ended up purchasing one for George Harrison as well. Both guitars ended up making rock and roll history with the Beatles, appearing on countless studio recordings, movies, and live performances. This is the acoustic-electric guitar John Lennon used in his initial songwriting with Paul McCartney, writing such classics as She Loves You, I Want to Hold Your Hand, Please, Please, Me, All My Loving, From Me to You, and others. John’s original model was lost in 1963, but mysteriously re-appeared in Los Angeles in 2015 and was auctioned for close to one million dollars. Today’s Gibson J-160E replica features the same round shoulder body design, with a Sitka spruce plywood top and mahogany back and sides, producing a full-sounding, balanced tone with warm, rich lows and crisp, presence-laden highs. 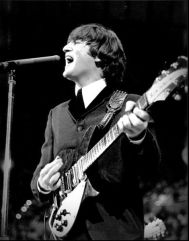 John Lennon had seen guitarist Toots Thielemans, of George Shearing’s Quintet, playing a Rickenbacker 325 in 1959. He immediately decided he had to have one. In Hamburg in 1960, John and George went to Steinway MusicHaus, where George bought a Gibson amp and John bought the “guitar of his dreams”, a Rickenbacker Capri 325 in natural finish. When recalling the purchase of the amp and the guitar, George Harrison remarked: “I think we bought them on “a knocker.” One pound down – and the rest when they catch you. I don´t know if we ever paid them off, but…” True to fashion, John soon had his Rick painted black, so as to appear different from the other garden-variety 325’s on the scene.

The 355 guitar is one of 3 Lennon models that Rickenbacker re-issued in the early 1990’s. The set included the ¾ scale 325 model like the one Lennon used live, on recordings and in the film “Help!.” The 355 model is like the 325, but in a full-scale length, while the 355/12 is the full-scale, 12-string model. All the pickups have that unmistakable “Rick” single-coil twang that made them synonymous with The Beatles, as well as the sound of the 60’s British Invasion. 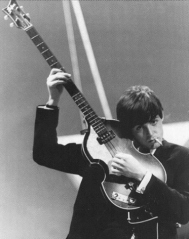 After bassist Stu Sutcliffe left the band in 1961 in Hamburg, Germany, Paul reluctantly stepped in as the Beatles bassist. Looking for an instrument, McCartney recalled finding himself in Hamburg’s Steinway Musichaus. “I remember going along there, and there was this bass which was quite cheap. I couldn’t afford a Fender. Fenders, even then, seemed to be about £100. All I could really afford was about £30, so for about £30 I found this Hofner violin bass. And to me it seemed like, because I was left-handed, it looked less “daft” because it was symmetrical. Didn’t look as bad as a cutaway, which was the wrong way. So I got into that.”

McCartney would soon become forever associated with this distinctive model. He used this bass on stage and in the studio through “With The Beatles,” at which point Hofner gave him a new model. So in 1964, he had his first bass refinished in sunburst and installed new hardware, after which it generally took a back seat to its newer brother. It appeared again in late 1968, minus the pickguard, for the “Revolution” video, and was last seen in footage from the film “Let It Be.” Soon afterward, it was stolen, most likely from a closet at Abbey Road studio. But Paul continues to play a Hofner violin bass guitar to this day.